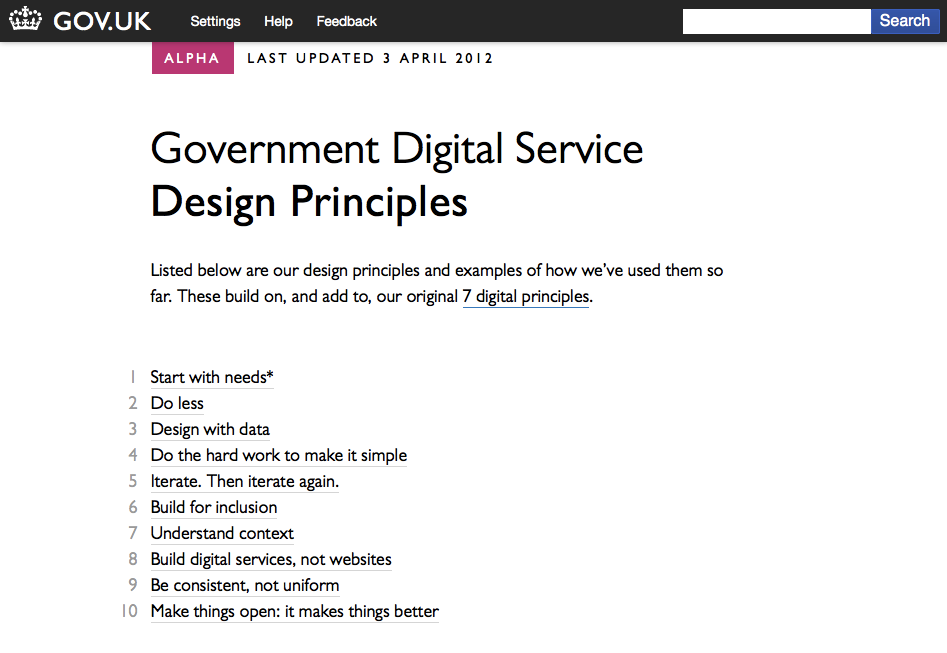 This week, the UK’s Government Digital Service unveiled a list of ten Design Principles. These are intended for for people building digital services under the GOV.UK domain, but I hope they will prove significant for absolutely anyone creating websites, intranets or other digital services, especially for those of us in-house.

For a moment, while reading this, I found myself actually shaking with happiness. It felt so good to see so much of what I believe to be true, put so clearly, in attractive way, by an organisation that needs little introduction.

In the next few days, I can see myself, and I hope many thousands of others pointing it out to any passing chief executive, IT director or communications director, and saying “look, the UK Government says start with user needs.”

That might be an attention-grabber, but I’d argue it is an important one.

The design process must start with identifying and thinking about real user needs. We should design around those – not around the way the ‘official process’ is at the moment
– 1. Start with needs

Too many intranet projects ignore user needs in favour of organisation needs, and can only succeed by bending employees behaviour to fit the tool (or being very lucky). By starting with the user, you can help people do what they need to do. This gives you something to build on.

Users are already using our services . This means we can learn from real world behaviour … [we should] continue this into the build and development process – prototyping and testing with real users
– 3. Design with data

Release Minimum Viable Products early, test them with real users, move from Alpha to Beta to Launch adding features and refinements based on feedback from real users.
– 5. Iterate. Then iterate again

Don’t just use logs and other evidence to create your next set of designs, take a leaf out of The Lean Startup and test your theories in the next generation of prototypes. And repeat.

We should build a product that’s as inclusive, legible and readable as possible…We’re designing for the whole country – not just the ones who are used to using the web.
– 6. Build for inclusion

It is so tempting to only consider the most likely users. After all, your project needs their participation to even stand a chance of being a success, but they’re not the whole organisation. Often, the people you can help the most are the ones who’re being helped the least.

We’re not designing for a screen, we’re designing for people. We need to think hard about the context in which they’re using our services. Are they in a library? Are they on a phone? Are they only really familiar with Facebook? Have they never used the web before?
– 7. Understand context

Context of use is so important, and has been badly neglected through the computer-browser era. We’re beginning to appreciate the benefits of responsive design (btw. try resizing the Design Principles page) and what that can mean for people using anything other than a computer, but there’s something more. Perhaps your user is in a library on a phone? From this point, things are only going to get more complicated – the era of everyone accessing your intranet from Internet Explorer is over.

Our service doesn’t begin and end at our website. It might start with a search engine and end at the post office.
– 8. Build digital services, not websites

For most businesses, an intranet that only exists for what happens online is meeting only a fraction of its potential. If we start thinking of intranets as being the first part of a digital service, we can start to unlock that potential.

For good or bad, or probably just being plain nosey, I find myself attacking a questionnaire on my radio listening habits.

It’s a long and fiddly one, and just when I find myself getting towards the end, I get thrown by this:

A cold viewing, I suspect, would make absolute sense. However, I’ve just been through twenty or thirty pages, with each one’s answers appearing in the horizontal axis. Here I find myself with only three distinct answers for four questions. I feel indebted to Garr Reynolds of Presentation Zen for introducing me to Benjamin Zander, or at least the following video of him talking to music students:

Zander is the British-born conductor of the Chicago Philharmonic Orchestra, clearly an incredible presence on stage, and apparently now a big name on the management training circuit. Here, he is talking about being a performing musician, but the parallels are not lost:

We are about contribution, that’s what our job is … everyone was clear you contributed passion to the people in this room. Did you do it better than the next violinist, or did he do better than a pianist? I don’t care, because in contribution, there is no better!

Spin that yourself any way you like, but Zander clearly isn’t a man interested in the substandard.

When my DVD rental firm LoveFilm (www.lovefilm.com) told me they were improving my DVD rental queue, I was delighted. Now, I fear I will get a worse service, and a worse experience. I’ve been using them for two years now, and generally have been pleased. A while back they seemed utterly incapable of sending anything within my queue’s top twenty, dipping once I recall into the top forty. A while back, they hit on a wheeze called FastTrack, a kind of guaranteed delivery service for items that were no longer in demand. If you wanted one of those films, all you needed to do was put it in your top ten – why the song and dance?

You see, at least they had a queue system. It worked, of a fashion.

Now, instead I just rank my items as high, medium or low. I suspect this means it’ll skirt over my High Priority discs, and pluck something from Medium. With a list that hovers around the 100 mark, I don’t expect any of the low priority items will ever get a say.

That’s what I mean about ruining the experience. The discs I wouldn’t keep at the head of my queue always got a chance. I liked the way they’d bubble up the queue, and thrust themselves at you at some unsuspecting moment. They’d done their time, therefore they deserved to be watched. How will the delights like The Station Agent or Lagaan ever reach me if I pause each time I think about raising their priority?
You can probably criticize me for both wanting too much control, yet relishing the lack of it.

Right now, I think I stand even less chance of getting the discs I want, when I want them, compounded by losing out on the little gems. Perhaps I’ll make everything low priority, except for a few. I’ll let you know if it works. Otherwise, know any rental sites that will import my queue (albeit broken?)