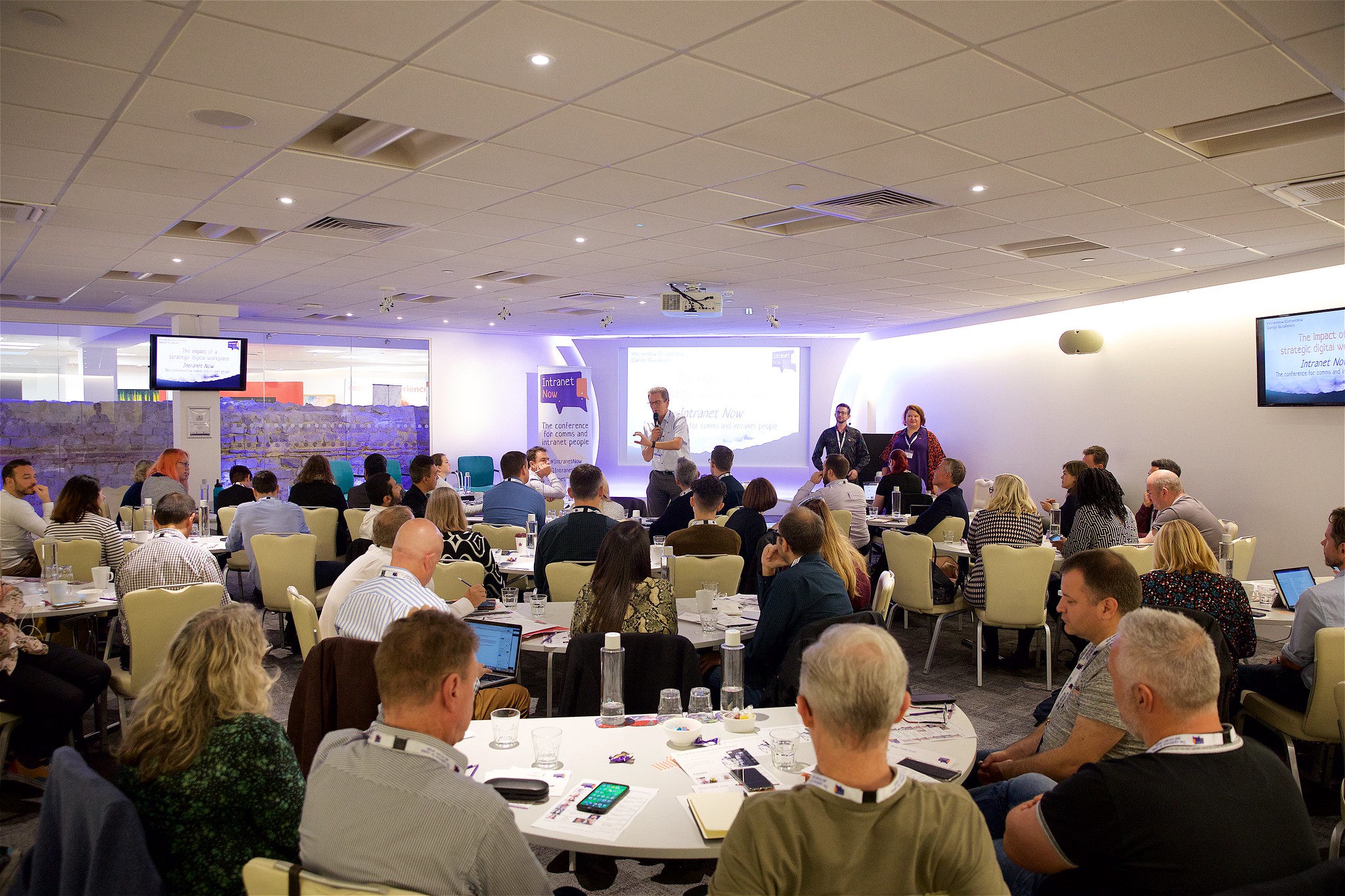 It feels a little odd to be back at One America Square so soon after the last Intranet Now conference, not that I’m complaining. The previous Summer Edition was an experiment that I very much enjoyed (Intranet Now 2019 Summer Edition), and it is always a pleasure to immerse myself in the event.

Fintan Galvin (Invotra)
The elements of a strategy

If what the attendees really needed to wake them up was a head-to-head comparison of the strategies of Ghengis Khan and Dominic Cummings, then it worked.

The theme of the conference was “the impact of a strategic digital workplace”, something Fintan admits he’s obsessed with. He neatly sneaked in a little plug for Invotra’s strategy of embedding customer focus in their culture, and contrasted that with their tactics to achieve that.

Fintan made a number of memorable contributions.

For me, the comment that made Fintan’s keynote was that “intranets are the most flexible systems in any ecosystem. This makes it harder to draw strategic lines.”

I’m not sure I see that as a bad thing. If we see the intranet as a tool that has the strength and the flexibility to take the load, to try things out, to learn more and subsequently move them elsewhere, then that’s a good thing. Think, perhaps, how easy it is to build a tool in SharePoint with a list or series of lists behind it. This can be seen as a strength, and the lessons learned can be turned into a proper solution. Even if the only lesson learned is that the demand wasn’t sufficient or the admin burden was higher, then the strategy will have paid off.

The first in-house practitioner on stage, John highlighted a product team approach to researching, building and running an intranet, in contrast to hiring a consultancy or buying an intranet-in-a-box product.

Melissa Masterson (The AA)
One small step back, one giant leap forwards

It’s a little unfortunate that the thing we’ll remember from Melissa’s engaging talk is that jellybeans go down well as an intranet promotion tool. Melissa, very honestly, admitted to knowing very little about intranets when taking her role, and thinking the AA intranet could be relaunched in 6 weeks.

What the talk should be remembered for is in-depth research, supported by Scarlett Abbott and an impressive launch that reached a large proportion of the remote workforce – 87% of colleagues accessed the service.

This was a really practical introduction to improving the quality of your intranet content, and of getting the right content for the right reasons. As Kelly says “What is the point of spending tens or hundreds of thousands of pounds on your intranet if you’re not trying to get it as right as you can?”

Kelly made three key points: define your goal, understand your audience, and audit against user needs. I particularly like the last. Her pup of intranet content will also go down in Intranet Now fame.

Martin shared a case study of the ups and downs of intranet at Nature Scotland. Hard work and research weren’t enough to guarantee success, but the arrival of a new CEO and her cycle ride around nature sites across Scotland helped change the way colleagues communicate and collaborate. I’d like to see more with this level of honesty.

Hannah Moss (Wilmott Dixon)
Give the people what they want! (Then measure it)

Another positive case study, this time looking at bringing in Office 365 at construction firm Willmott Dixon. It’s clear that good understanding built on good research has contributed to its success. I particularly like Hannah’s slide of a decision tree showing what tool to use for a variety of different activities.

A case study from Cloud 2 customer and now a convert to Microsoft Teams. Martin Hutchinson was a strong advocate but seemed keenly aware of some of the risks of getting things wrong. It would have been great to see the solution in action.

Kurt’s benchmarking graphs have become a familiar sight at intranet events, and are full of rich information. My main takeaway this time is that Enterprise Social Networks are most successful when properly embedded in the digital workplace.

From the grand scale to a very specific research tool. Greig talked about a digital diary to really understand the tools being used by colleagues across the company.

The team used an app to survey 22 people over the course of a week, and a real-time dashboard enabled the team tweak it while in progress. This feels obvious, but we should try to remember Greig’s finding that when under pressure, people revert to the tools they know, and that tends to mean email.

Talking about WM Reply’s client British American Tobacco, James underlined some of the problems facing a company of 42,000 employees across 185 countries. A little more detail would have been appreciated, but it was good to see the benefits of rebalancing effort from development towards UX and engagement.

Annette’s comment that “Auditing is the Spanx of your strategy as it puts you in good shape” will be remembered for years of Intranet Now to come.

And the remainder of the talk was full of good advice for auditing content. Looking forward, Annette suggests turning your audit into a working document so that you continue to benefit from your efforts.

Charles Fenoughty, Sequel Group
Do, know and feel: A framework for understanding the modern workplace

Do (personal productivity and group productivity), Know (work information and practical comms), and Feel (communication) is a great lens to help plan your digital workplace. I don’t think it is perfect, but it’s a very good start.

As if that wasn’t enough, his Venn diagram will provoke a lot of debate more down to the positioning of IT, HR, and internal comms. The four sets of information, communication, collaboration and transactional process are a very good way consider the roles of a digital workplace.

Mark Owen (Affinity Water)
A briefing counter – are they the one?

Another dive into a detail, this time with the challenges around a team briefing communication. Following a significant spell of design research, the team at Affinity Water came to understand the problem that email briefings were not being cascaded to all the people who needed them. Mark showed an impressively modest solution using Microsoft PowerApps to monitor the reach of these communications. This has helped to improve targeting and increased participation.

Jon is an experienced speaker and consultant, but new to the world of Intranet Now. Nevertheless he was an excellent addition to the conference, and a lot of us were contemplating buying his book The Social Organisation.

It was a healthy reminder that businesses have been trying to reorganise themselves since long before intranets, and that perhaps those of us who see things from a digital-first perspective really ought to be seeking out insights from the likes of Organisation Design.

The day concluded with a debate on governance. Tanya from Savilles argued for a light-touch form of governance, albeit with a firm foundation of understanding.

Chris, a consultant and co-founder at Spark Trajectory, took the opposite position, that without strong governance “you are not an intranet manager, but an intranet observer.”

Between these positions, sat Tony from consultancy Scarlett Abbott, arguing for greater nuance.

It was a good discussion with strong questions from the audience, and became more heated than I would have expected. My favourite contribution came from Charles Fenoughty, who suggested that the sides of the debate weren’t so different, but the problem was in fact being viewed from different positions. The word I wrote down while considering this was “provenance”, perhaps it isn’t governance we need, more a better way of measuring the quality and lineage of information.

Having been invited to speak at his IntraTeam conference in Copenhagen this year, I could hardly disagree with the choice of Kurt Kragh Sørensen for the award. Kurt has been a major contributor to the community for years, he is a big supporter of new speakers, and never less than great company. He is, after all, the vegan who cheerfully eats salad while his guests tuck into multiple varieties of traditional Danish pork on the first night of IntraTeam.

One of the delights of the Intranet Now format is that it has room for the grand scale and the detail too. That we could see Greig Rutherford’s digital diary alongside stories of major launches, or Annette Corbett digging into the minutiae of content audits on the same bill as Jon Ingham discussing organisational design.

Also, in spite of the stated theme of Strategy, what really developed was the theme of quality research. It is now clear that successful projects are rooted in real understanding of employee needs. Similarly, doing content well is now part of the equation.

I will continue to think about Fintan Galvin’s comment about the intranet being the most flexible part.

All in all, I had another enjoyable day, I felt energised by it, and I’m already looking forward to Intranet Now in 2020.

This site uses Akismet to reduce spam. Learn how your comment data is processed.