There was a tearful moment midway towards the end of the morning session of the first of two Intranet Now events for 2019. It may have come as a surprise to the many first-time attendees, but I hope it was understandable to them.

Giving the Intranet Diamond award posthumously to our friend Rupert Bowater was always going to be difficult, and organisers Lisa Riemers and Wedge Black took turns to choke-up while making the announcement. It was an emotional decision, and absolutely the right thing to do.

In some respects, Rupert seems an odd choice. He wasn’t a big name in intranets, he didn’t win awards or become a big-name speaker, but Rupert was more than a familiar face. He was kind, gentle, generous and a keen supporter to many of us. He was a real pillar of the community, and that was a point that Wedge (successfully, I believe) made. While it is a business, Intranet Now remains a community event, and the relationships formed in the last five years have contributed to supporting people in their work, their thinking, and as friends.

Jamie Garrett – Working together to give 90,000 employees a voice

Sponsors Invotra talked about some of the lessons learned at one of their biggest customers, a government department, and about changing the emphasis from merely “employee voice” to “employees with a voice”.

Most striking was that the fourth most popular group was employee support for menopause. Social tools in the workplace are genuinely giving people a voice, and I truly hope are making difficult circumstances a little bit easier.

The Federation of Small Businesses is supported by a network of field sales membership advisors. To engage this essential part of the organisation, Ayesha simplified the interface they would see in MyFSB and made it more visual. This was simple and effective, and has contributed to changes within the broader intranet. A perfect case study for the short-form format of Intranet Now presentations. 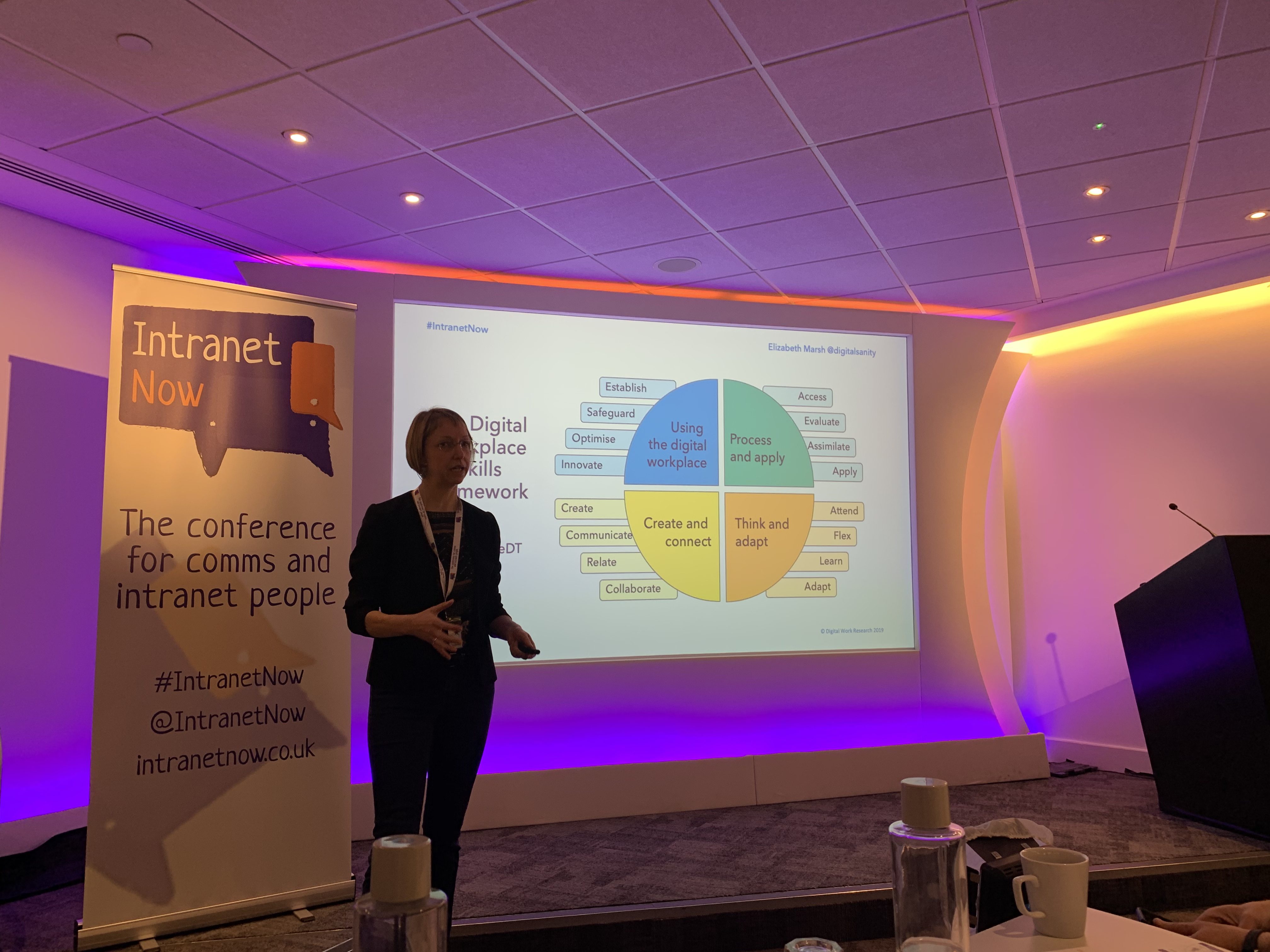 Elizabeth is bringing experience, a passion for learning, and academic rigour to the subject of digital literacy. She gave a tour of her digital workplace skills framework and made very clear arguments why we need to be doing more, and thinking more deeply about what learning and skills mean in the workplace.

By day, Jesper leads the intranet for Sweden’s Region Skåne, and by night he spends a lot of time thinking about how to do intranets better. Aside from his blog, an essential viewpoint from an intranet practitioner, he has now produced his Intranet Governance Game featuring more than 100 cards to help organisations understand their priorities. Later, at the table discussion sessions, attendees were surprised at how many challenges they shared. 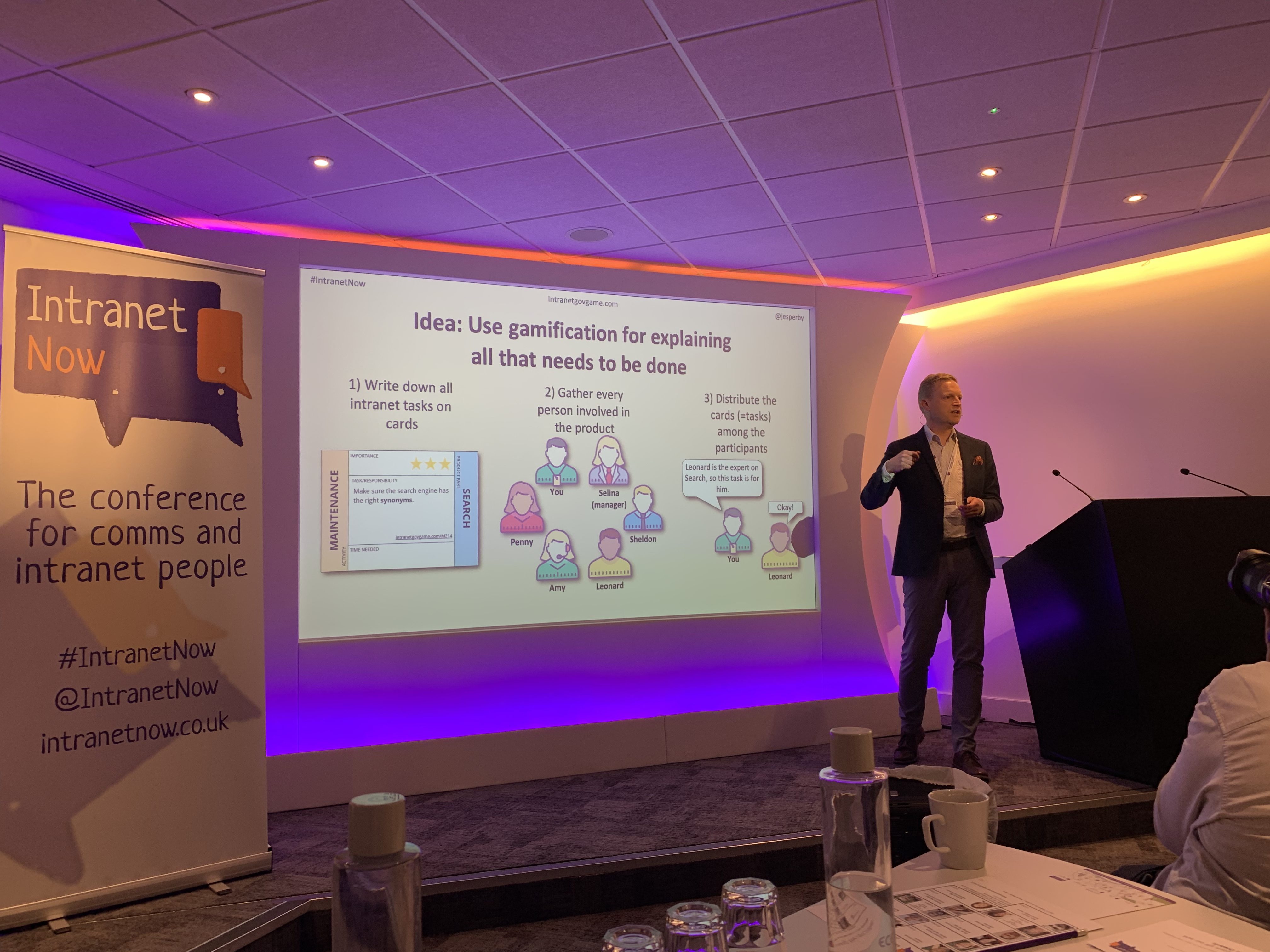 Describing a pro-active approach to the ESN at Kellogg’s, Anne-Marie shared some familiar approaches, but also made some important points that are often missed. I will smile for some time at at the thought of vlogging lessons for staff, but hope to think a lot more about the idea of not promoting the tool, but instead promoting what the tool facilitates culturally.

Dominic, from sponsors LumApps, joined Mark from Just Eat to describe what strikes me as a simple but coherent vision of the digital workplace, with Google Apps appearing there on a page that combines news flow, a hierarchy of information, and social collaboration.

Sam described two types of glue, of search and of signals, that can help stick together the parts of a digital workplace. It was a timely raising of the subject of microservices to simplify an employee’s experience of online services.

I was left wanting to see more of the work done by the Scottish Government to simplify their intranet Saltire, as well as their onboarding tool that Marion discussed. For a large organisation, the customisation by agency must be complex. If indeed, 86% of starters say they’d completed mandatory training because of Saltire Tour, then that will be making a significant contribution to the culture.

Larraine has been talking about her task at recruitment firm Monster for some time, and her collaboration with sponsors Beezy is really showing the benefit. The platform is allowing a broad range of business information, and complementing it with social tools promoted both top-down and bottom-up.

Halfords, like many retailers, has the challenge of reaching employees where they’re working, especially since so few have access to computers. Nevertheless, with their mobile app and registration using personal emails and links, they’ve brought a useful tool to the business.

With 10,000 users and hundreds of tools and applications, South Wales Police have a significant challenge getting the right information in front of the right employees. Having identified 400 logical groupings in the HR system, and with the ability to update in near realtime, it appears to be a significant success.

Wedge and Lisa tried out a new approach of introducing more voices, and embraced the “this is a statement and not a question” attitude that tries the patience of conference attendees, and turned it around. Attendees could raise an issue, raise an issue, or even ask a question. In spite of it being discussed before, the audience was a little uncertain (I spoke first, thoroughly unprepared, because I didn’t see any hands being raised), but by the second SNAQ session people volunteered more readily. I’d really like to see this continue in future events, but with greater opportunity to include other voices.

Debate: What’s the best way to create an intranet?

The event concluded with a debate that really worked well. Christian Sutter had the most challenging position, that a business is best off building its own intranet from scratch. Sharon O’Dea had a lot of fun arguing the opposite, that the only way forward is by buying in the tool. Lastly, Allan Tanner took a mid-point in that pic’n’mix is best. Not only were the introductions fun and interesting, but the discussion that followed was rich.

All in all, Lisa and Wedge achieved a good balance that met their promise of a fresher, more summery Intranet Now. It was less hectic, and gave more time for conversation and even a hint of reflection. I look forward to seeing the autumn Intranet Now taking shape.

Find out more about Intranet Now at https://intranetnow.co.uk